Brayden’s favorite friend from daycare, Elijah, and his mommy, Elinor, came over for a play date. These two little boys got into everything, and I’ve got the pictures to prove it.

Brayden and Elijah have been schoolmates since they were about 1 and became “Cuddly Kittens” together (the name for the 1-year-old classroom at daycare). Elijah is a frequent guest in the blog and co-star of the very popular dance video in the post Little Buddies.

Toddlers are a crack up to watch in action. They understand the etiquette of sharing but take parity very seriously. It’s not unusual for each child to use a toy for a pre-determined number of minutes or turns before it’s time to switch. A good example of this was dress up time. Both Brayden and Elijah took turns as a pirate and super hero with very cute results. 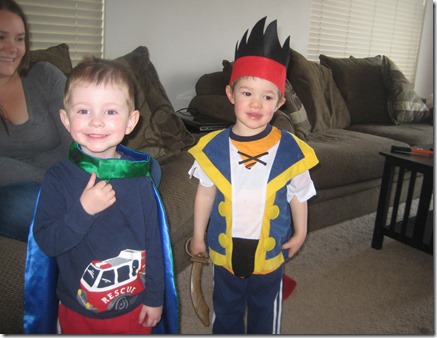 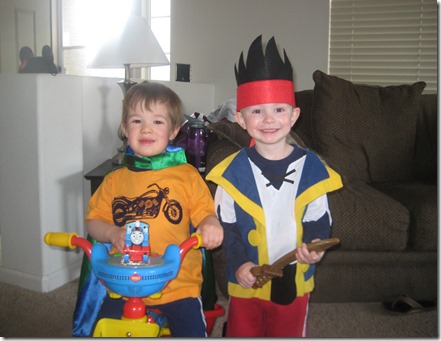 The boys were whirling dervishes and tore through just about everything we had in the living room. Trains, cars, books, sports equipment and much more were left in their wake, but the funniest moment occurred when the boys started playing with the cooking toys and both laid eyes on the whisk at the same time. Up until this point, they had been sharing very well, but there was something unusually compelling about this little plastic whisk. A few tears were shed, a second whisk was procured from the kitchen and then the boys hugged it out Entourage-style.

Not a minute later, they joined forces to raid my drawer of real kitchenware and made off like cuisine capers with a garlic press, tongs and strainer. 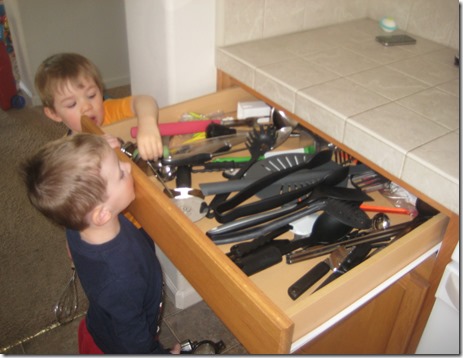 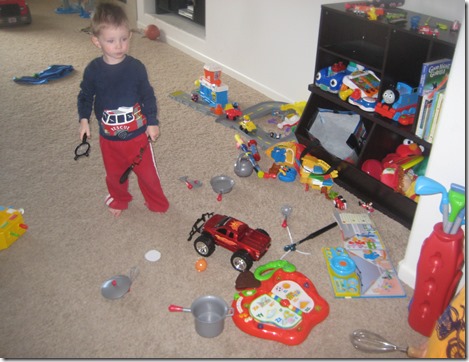 After they finished playing out their own version of Top Chef: Toddler Edition, they worked together to build towers with blocks and ate pizza (love the picture of them doing “Cheers!” with their crust). 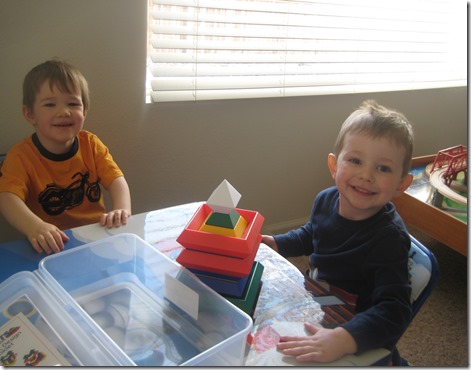 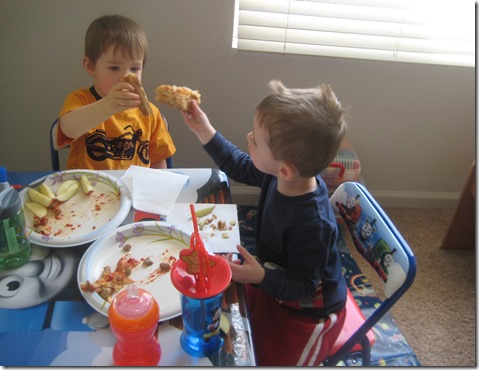 It was a full, fun morning of toddler play. After Elijah and Elinor left, it was time for nap. I asked Brayden if he wanted cocoa before he went down to sleep and he said, “No, Mama. I want Elijah.”

As adults we know a good friend is invaluable. No money, status or item is worth more than a true friendship and especially those we’ve had since we were young.

I’m happy to know that even at two, Brayden recognizes that his little buddy Elijah is even better than chocolate. Is there a higher compliment in the world of toddlers? I think not.