Now that Brayden sits like a pro, he can tackle advanced new sports… like riding in a shopping cart! My mom got him a cute, comfy seat cover that totes around his toys and keeps him away from the cart itself (so I don’t have to freak out when he starts sucking on the metal.) Here’s a video of the grocery rodeo event: 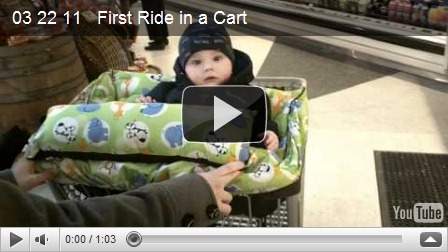 Today was my first birthday as a mommy, and it was a very special day. I woke up to cards from Brayden and Brian, and the day just kept getting better from there. The girls at work all came by to say “Happy Birthday!” first thing in the morning which was so sweet. My mom, Krys, went into daycare and decorated Brayden with a sign, balloon, rose, cupcakes and a card. Then I got a truly adorable picture via text message!

When I got home there were beautiful flowers from my sister and brother-in-law, Heather and Jacob, and touching cards from family and friends. Thank you to everyone for such a wonderful day. I appreciate it so much! 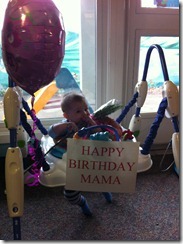 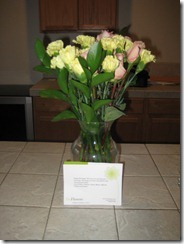 Brayden modeled like a pro at his six-month photo shoot with Jea Smith,owner/photographer of Jeanne Images. As they say, a picture is worth a 1,000 words and, in Brayden’s case, every single one of those words is adorable!
A super special moment was when Brayden was photographed in his autographed NOFX onesie – the ONLY baby onesie to EVER be signed by the band. After much creative wrangling, I was able to gift this to Brian during our pregnancy. The onesie will now be framed along with Brian’s favorite NOFX CD for Brayden’s nursery.
We hope you love these as much as we do!

Just like PB & J, carrots and faux hawks were meant to be together. As you'll see, Brayden wears both to perfection.

On pins and needles

I know that the blog is usually dedicated to the daily exploits of Mr. Brayden Jewell BUT we did promise updates on the adventures of the whole family. And I certainly had an adventure yesterday - I got acupuncture for the first time!

My new primary doctor is part of an integrated healthcare practice, and she recommended acupuncture for my digestive system and general stress relief. I shuddered at the thought initially, and immediately pictured myself like the guy from Hellraiser with the white skin and the needles poking out of his head. The doctor saw my apprehension written across my face and assured me I would be fine. Three weeks, two explanations and one facebook post later, I was laying on the table.

I explained to the acupuncturist, a cute blonde lady, that I do not like needles. She explained the process and we did a tester needle. (NOTE: I kept my eyes closed the entire time I had needles in me. I never actually saw them because that would have sent me into a panic.) She puts a little blue tube against your skin at the pulse point and pops an even tinier needle through it. Occassionally I felt a small poke but it was mostly OK. One needle had to be moved because it hurt.

After they were all in, she left me to "relax" for 15 mins while I listened to music. I had her leave me a bell in case I freaked out. I didn't move one inch, I just laid there. It was a really interesting feeling. Different pulse points were toggling back and forth almost like a game of energy see-saw. And then out of nowhere - Zing! - a little sensation would pop up around a different needle. It wasn't painful, but it was definitely unfamiliar and a little strange.

When the acupuncturist came back, she removed the needles and asked me about my experience. She said that those "toggling" pulse points were actually connected, and that I was feeling the energy moving around inside me. Crazy.

Afterwards, I felt fine. I'm not sure what benefit I feel today but I know you're supposed to commit to a series of treatments and evaluate your progress then. I have appointments set for the next two weeks so I'll update you following those. Stay tuned...
Posted by Beth at 10:46 AM No comments:

Our first six months as a newly expanded family were definitely memorable. From Brayden coming into the world and us moving a month later to first smiles, sicknesses and solid foods, these months have been filled with new experiences.

Brayden’s six-month half birthday is the starting point of the next chapter of our lives. Brayden literally advances by the day (as proven by the video below). Here’s the little man’s stats as of March 5, 2011:

Weight: 15 lb. 10 oz.
Height: 26 3/4 inches
Eyes: Blue with tinges of green
Hair: Very light brown with glints of sunny gold and auburn
Teeth: None yet
Sleeping: About 10 hours every night from 7p to 5a
Personality: Very happy with easy giggles and two cute dimples that could rule the world
Health: Several colds and respiratory infections. Just cleared up his third ear infection.

In Tuesday’s blog post, I said Brayden sat for one or two seconds at a time. Well, by the looks of this video, you’ll see he didn’t stay at that level for long. What will this adorable child do next? We don’t know – but we do know that we’ll share it with you. Thanks for your love, special messages and the time you spend following each of our amazing moments. We appreciate it more than you know. 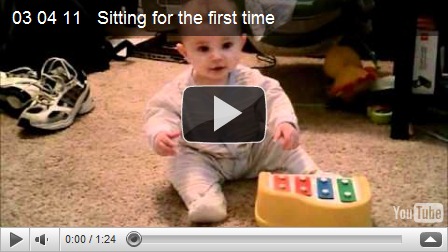 Today is a wonderful day – Brayden’s six-month birthday. Brian and I cannot believe it’s been six months since our little man came into our lives.
We’ve got a few big developments to report on. He’s starting to almost sit, which is defined as Brayden balancing for a second or two before he topples over. I think he’ll be sitting on his own within the month. Brayden is also turning into quite the cuddler. It’s so nice to have him nestle into me during his calm, sweet moments. Last but not least, he’s also starting to blow raspberries! He blew his first one on Sunday at his Nana (my mom, Krys), and now he’s doing it pretty often. Here’s a little half-birthday video capturing him mastering his technique.
P.S. I’ll post his most recent growth stats and some other cute details on Friday after his ear infection follow up doctor appointment.