When your team’s not in the big game, Super Bowl Sunday is really just a day to throw calories to the wind and indulge in a food smorgasbord.

I woke up a bit petulant on Sunday. I’m pretty sure I was having forlorn dreams about the Patriots-Ravens AFC game the night before. This shoulda been our big day! I mean, the Giants didn’t even make it to the playoffs which means the Patriots actually had a chance of winning the Vince Lombardi trophy this time. Right?

Watching other teams play in the Super Bowl is kind of like watching your older, better, prettier sister get married before you a la Edith and Mary on Downton Abbey (sorry for the Masterpiece Theater-pigskin parallel… I’m crazy for that show right now).

But…not wanting to be a total football fusspot…I decided to focus on the positives of day (after I begrudgingly put away my Patriots shirt for the season). Food! Family! Fun! More food!

Reno has been buzzing about the Super Bowl for weeks because former UNR quarterback Colin Kaepernick is the starting QB for the San Francisco 49ers. The team also draws a big fan base given our proximity to the Bay Area. To show a little regional pride, Brayden dressed in a UNR Wolf Pack football warm up suit. Super cute. 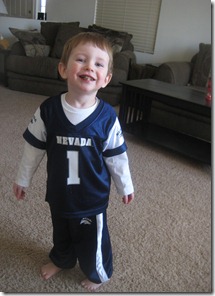 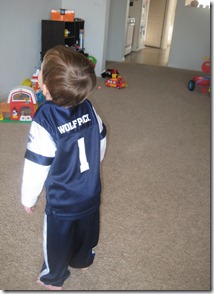 My parents were hosting an all-day-long Super Bowl celebration with a few friends so Brayden and I made our way over before lunch.

I don’t know what your Super Bowl party was like but before the game even started we had (in no particular order): pretzels and garlic dip, meatballs, pigs in a blanket, parmesan chicken skewers, bacon wrapped scallops, shrimp cocktail ,and chips and salsa.

My parents’ coffee table was a revolving door of appetizers. 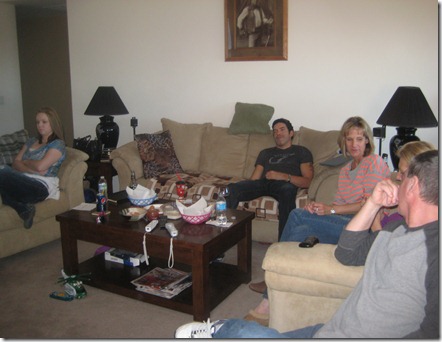 Brayden even got in on the fun with jello, yogurt melts and tortilla chips. Gotta teach ‘em young… 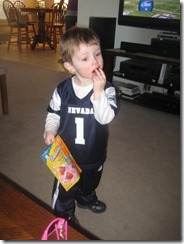 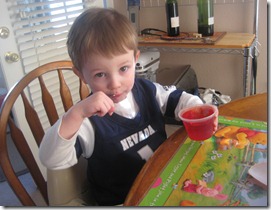 In the lead up to the game, we played a few rounds of Wheel of Fortune and The Price is Right on the Wii and a live round of Catchphrase. Once we were good and gamed up, the football (and dinner) got underway.

After consuming everything listed above, we had awesome BBQ ribs, veggies and salad for dinner…before immediately transitioning to a dessert spread of chocolate-covered strawberries, chocolate-dipped almond cookies and cheesecake bites.

I’m going to be sick just typing this. I consumed at least 4,000 calories between everything. Seriously.

Brayden was particularly excited about dessert because I let him get as chocolate covered as the food (bath time was happening next so why not?). 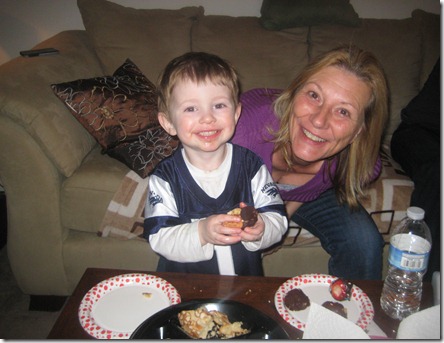 The Ravens won in the end (though I do think the 49ers were robbed when they didn’t get holding call against the Ravens on the 4th and Goal play at the end) and our guts lost but it was worth it. And besides, what’s a Super Bowl party without all the yummy food?

So the Patriots may not have been in the big game this year but at least I felt sick to my stomach for reasons other than disappointing defensive plays and missed catches. Belichick will draft well (as he tends to), and it’ll be the pre-season before we know it.

But in the meantime, congratulations to the Ravens fans out there. Your team fought hard and persevered.

See all you football fans in September!