With a day of festive fun (and my first-ever toy banning), Christmastime has arrived in the Jewell household!

I know the Christmas season starts for most on the day after Thanksgiving, but I like to wait until December 1. There’s just something about it actually being the month of Christmas for me to truly feel like it’s Christmas.

This year is a big one for Brayden. Although it’s his third Christmas, it’s the first where he has any clue what’s going on, and he’s ready to more fully participate in the special rituals and traditions of the season.

We got right down to business on Saturday morning when I introduced little b to his first advent calendar. To his utter amazement, I opened the little paper door with the “1” on it and revealed the chocolate surprise inside. Clearly the coolest calendar ever. It got better when he realized he was allowed to eat said chocolate surprise at 7:30a in the morning. 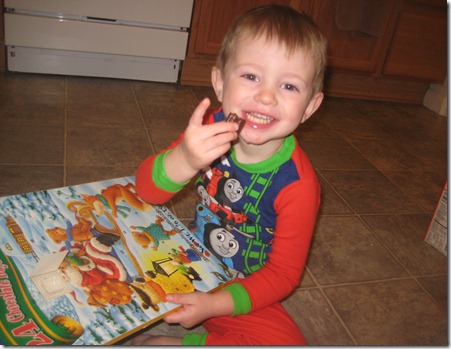 My dad, Brayden’s Papa, came over later in the morning, and we ventured out to get our Christmas tree. Brayden picked the one he liked and was happy to help his Papa unload it from the truck and set it up inside. 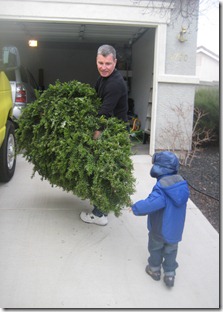 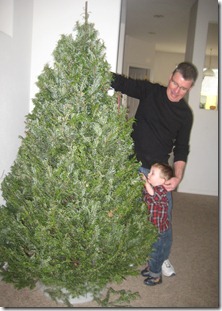 This was when I met the very first toy of Brayden’s I’ve ever hated—a train set that goes around your Christmas tree. My mom bought it thinking it would be a fun addition to our tree, especially considering Brayden’s love of trains.

I set it up for Brayden on the living room floor while my dad and I secured the tree, and the effects were immediate. Brayden was enamored, but it kept coming off the tracks or the cars would unlink from the engine and he would scream, “Mommy! Help! Train! Help!” This happened, like, 20 times. I immediately put the over/under for how long the train would last at a week.

When Brayden woke up from nap, we started to decorate the tree. B and I put the first ornament up together, our family ornament for 2012. Then he hung up his own 2012 ornament. 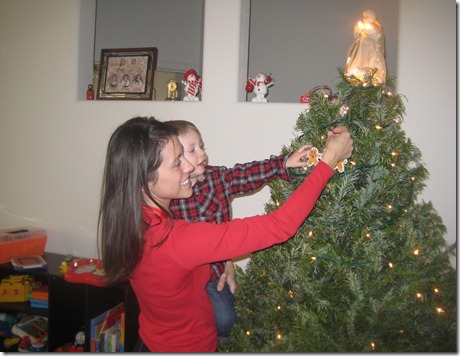 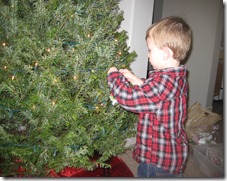 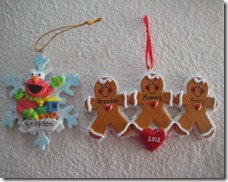 One of my favorite holiday memories as a kid was decorating the Christmas tree. My mom had all our personal ornaments from each year, and my little sister, brother and I would put them up on the tree. It was so great to finally be doing it with Brayden now that he was old enough.

Note the little hint of black train tracks on the red tree skirt. Forget making it to a week. The train lasted all of two more hours before I was about throw it out the window. I think I would have gone crazy putting that thing back on the rails every 30 seconds. To be fair, I’m not banning it for life…just for now. We’ll break it out again next year when Brayden can hopefully put it back on the tracks himself. I think most parents have banned an annoying toy at one point or another (or so I tell myself so I don’t feel like the Grinch that banished my son’s beloved Christmas tree train…)

The tree came together beautifully, and Brayden helped Papa put up the last few decorations before we called it good. 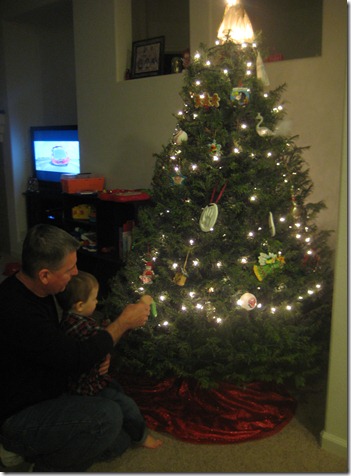 To cap off the evening, we watched Rudolph the Red Nosed Reindeer and Frosty the Snowman. The perfect way to kick off the holiday. And just wait until Brayden finds out there’s another chocolate candy behind door number 2 tomorrow! I just love this time of year. Merry Christmas!