Mommy Makes a Craft – Part I and II

As promised, this post has been updated and now features a Part II below.
Part I – I’m not crafty. I don’t know the difference between macramé and paper mâché and don’t get me started on a cricket versus cricut. But a certain chicken motivated me to get creative for Brayden’s upcoming 2nd birthday.

I can just hear you now. 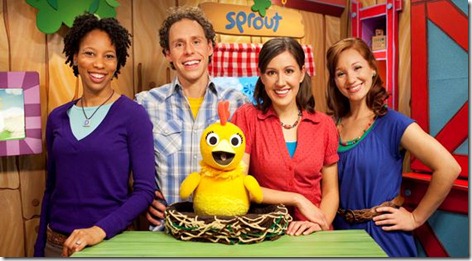 Let me introduce you to Chica the Chicken from Sprout’s Sunny Side Up Show. (Sprout is a television channel run by PBS KIDS that plays educational cartoons and live shows.) One of the neatest things Sprout does is a special birthday shout out to all the “Sproutlets” whose birthday it is that day. You can submit cards or online announcements, and some cards are chosen to be shown live on air. Every birthday boy and girl gets acknowledged on a scrolling message board at the bottom of the screen.

With all this said, I bet you have a good idea where this is all going now. I am putting on my crafting mommy game face in an attempt to make a card that wins a spot on the show on Brayden’s birthday, Saturday, September 1.

But first, let me back up. There’s a reason I don’t craft. It’s not that I don’t recognize the cuteness of crafts or admire other people’s crafting talent; I do. It’s just that I have zero aptitude for it. As in none. Over the years, I have suppressed the memory/knowledge of my sucky craft skills and tricked myself into failing miserably at trying “home made” gifts. There was the horrible planter incident of 20031 and the more recent handprint stepping stone of 20122 that only my mother could love. (Scroll to the end of this post for photo evidence of these atrocities).

But history be damned! Chica the Chicken is going to choose Brayden’s 2nd birthday card to show on air if it’s the last thing I do! So, in the words of my crafting foremothers, I declare to the heavens the battle cry of a million mothers before me, “Off to Michaels Arts & Crafts Store!”

I don’t often go to Michael’s, let alone on a mission from God. I weaved through the store’s 65 aisles of popsicle sticks, scrapbooking paper, puff paint, polyester flowers and glitter pens with focus and determination until I had amassed all the accoutrements necessary to build the card. And this stuff ain’t cheap. Here’s my $30 haul (and some of that stuff was mine already or print outs from the internet): 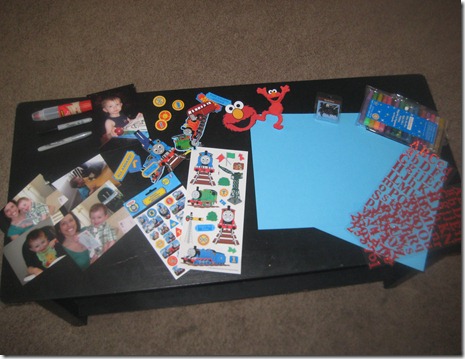 Ohhh…here’s a fun one for you. See that little box in between the jumping Elmo and the kit of glitter glue pens? Those are little tack things called “brads”. Yeah, I know lingo like that now. My $30 didn’t just buy me crafting stuff; it bought me an education.

I spent two hours thoughtfully decorating the card, separating it into two distinct areas: Thomas the Train and Elmo. And since history not learned from is doomed to repeat itself, I did as little manual art as possible and instead glued pictures and cutouts to the pages and used stickers for the words.
Now, I might be kidding myself here, but when it was all said and done, I thought it came out halfway decent. Here’s the front: 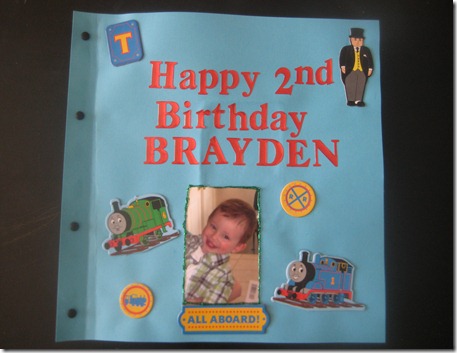 And here’s the inside spread: 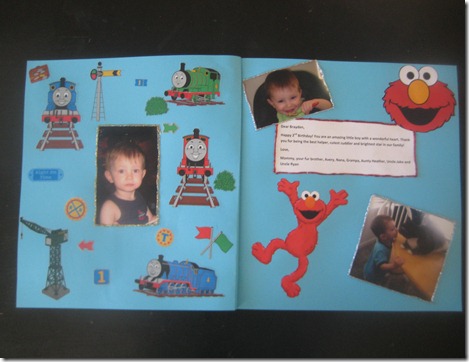 P.S. Did I mention I use words like “brads” now?

I fully realize that my card has a slim chance of being selected for the show, and (since they keep all the cards) I knew I had to let Brayden enjoy the card now before I mailed it off because he might not get to see it otherwise. To my happy mommy chagrin, little b loved it! He declared “Brayden!” and “Thomas!” and “Elmo!” and cried when I had to take it away which I took as a sign of pleasing the only audience that really counts, my sweet baby boy. 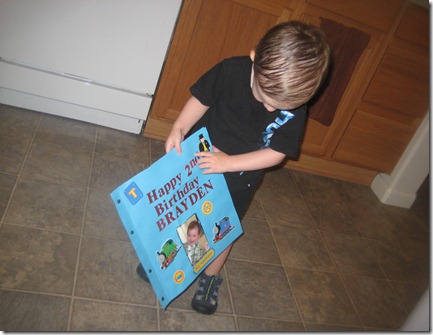 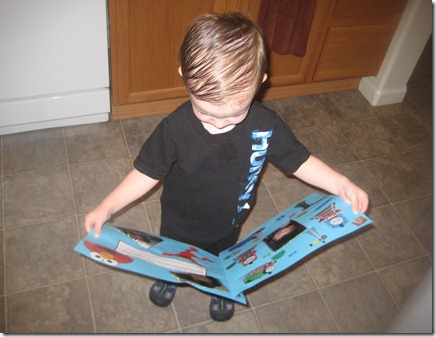 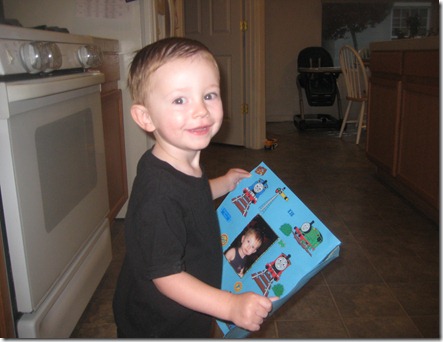 So, will my card be shown? Only the Chica the Chicken knows and she’s not clucking (sorry, I couldn’t resist!). Tune in to the Sunny Side Up Show on Sprout with me and Brayden on Saturday, September 1 to find out. Either way, I promise to post an update on this entry on the day of.


To Be Continued…
Photo Evidence of Beth’s Previous Crafting Atrocities
1. For Christmas 2003, I decided to make my mom a planter with a lacquered, glass-embellished cement stone. My very good friend, Hannah, and her mother, Kristy, make beautiful ones and insisted it wasn’t too hard. Maybe if you’re not crafting impaired. Mine cost me over $100 after I destroyed the first one, and the second one was barely an improvement. My mother dutifully keeps my adult version of a macaroni necklace in the living room with a plant on it to this day. 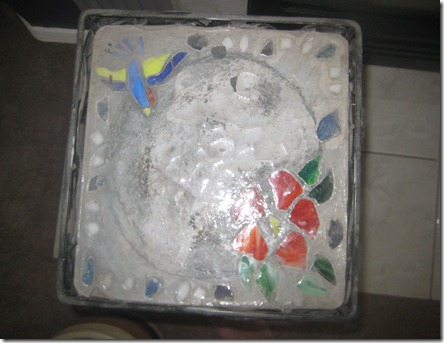 2. For Mother’s Day 2012, I decided to make a handprint stepping stone from Brayden to my mom. (I know; why do I keep doing this to my mother?) The writing on the handprint side looks like I scratched my last words in dirt before dying, and the painted side feel reminiscent of a first grader learning to write capital letters. The only thing that came out halfway decent were the flowers and that’s only because they had outlines. 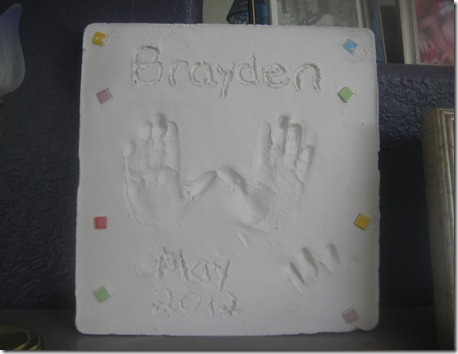 I know many of you checked back on this post and asked why I hadn't updated it yet. Well, I have a very good reason for the delay although it's probably not what you're expecting. After all the card building and blogging and wishing and hoping...I have no idea if the card was shown. Seriously.

How is this possible, you ask? Well, I made a series of JV mommy mistakes:
I called Sprout after the holiday weekend and asked them how many cards they usually each day. The girl said they usually do five to six segments and show 10 to 12 cards. I know 20 cards were mailed in that day because you can see them all on the Sprout website here, including the card I sent Brayden. So that means Brayden's card may have been shown and I just didn't see it!

Sprout won't tell you if your card has been shown but you can order a tape of any day's Sunny Side Up Show through a third-party vendor they work with. I contacted the company and found out it would cost $65 to get a DVD of that three hours. $65—are they crazy? For three hours of recorded television? But even so, I agonized over it for almost two weeks and only just decided it wasn't worth $65 to see if Brayden's card was shown.

So, folks, there you have it. After all this, I don't really know if his card was shown. But I can tell you this, I won't make these mistakes next year! I will have my glitter glue at the ready and my DVR set to record every blessed second of Sprout on September 1, 2013!
Posted by Beth at 10:48 AM