What do these three things have in common? If you guessed my company picnic then you are: A. correct B. psychic C. need to pick my lottery numbers

My company picnic was held last Saturday at the Lazy 5, a regional park with event areas and a splash park. My mom and dad came with Brayden and me to share in the fun. I should also mention that the night before, Friday, was Brayden’s first time sleeping overnight at my parents’ house. It was his first time knowingly sleeping overnight anywhere else than Brian’s or my house (not counting when he was a tiny baby). He did great sleeping in the pack ‘n play and adjusted just fine.

After establishing our blanket compound, Brayden shot straight over to the bounce house. It was a really big one with obstacles inside and a slide. Since we got there early, Brayden had his run of it. 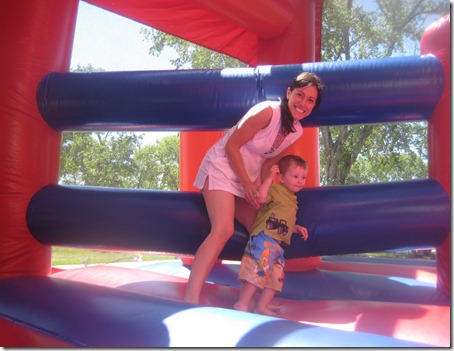 After the bounce house, we made our way to the splash park. Different areas and zones turn on at different times and different intensities so it’s fun for little ones of all ages and bravery levels. 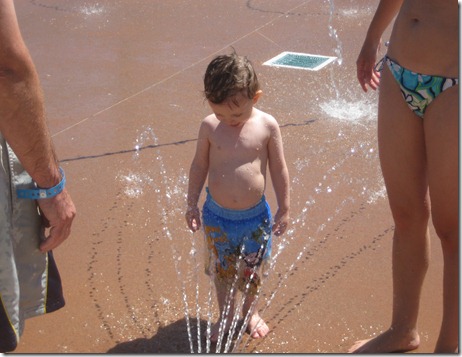 When we were done with our splish splashy fun, we packed up and walked across the grass back to the party area. That’s when it happened.

I was wearing flip flops but somehow managed for my right instep to come right down on a big, fat bumblebee. I had never been stung before, and the sharp, piercing pain completely caught me off guard.

Completely shocked by what happened, I reacted instinctually without thinking and yelled a very bad word that rhymes with “muck” and lifted up my right foot. To my horror, two things happened next: 1. Brayden loudly parrots my bad word 2. I notice the bee is still attached to my foot.

I chose to (hopefully) mitigate the damage I had caused with B first. As soon as the sound escaped Brayden’s lips, I immediately pointed to the parking lot and yelled, “Truck! Truck! Mommy sees a truck!” in a feeble attempt to reform the word memory Brayden had in his head. Then, I frantically looked for my parents so I could hand over Brayden to one of them and deal with horror #2.

Now, bear in mind that everything I just wrote happened in about three seconds, and both my parents were looking at me like I was acting out a scene in a crazy sitcom. I’m screaming expletives/identifying trucks while holding my toddler and balancing on one foot. Oh, to have had that moment captured on video.

Once they figured out what was going on and Brayden was in safer arms, I got the bee off but not the stinger. I’ll spare you the details, but seven days of itching, redness and pain ensued. I hope I go another 33 years without being stung because that was no fun.

With the drama behind us, we rejoined the picnic and had lunch. 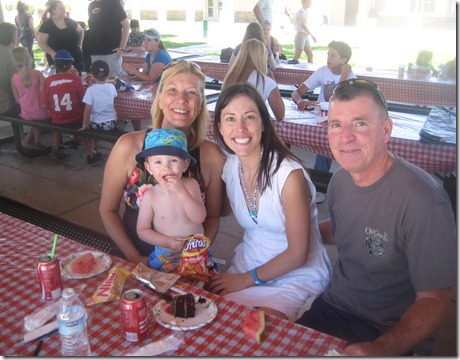 Brayden is a fruit fiend and happily tore into a piece of watermelon. 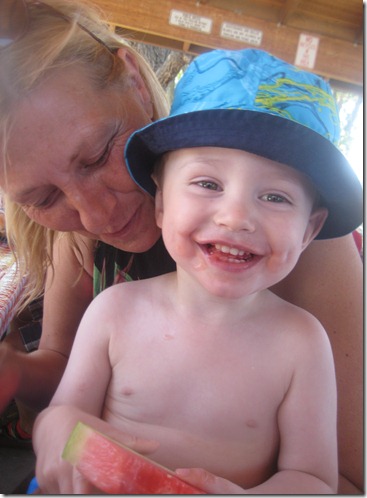 After an eventful hour and a half, it was time to head back to my parents’ house so little b could take his nap. Flash forward to now and thankfully Brayden hasn’t used that word again. Or maybe I just choose to see it that way because every time he points to a vehicle and says, “Truck!” I can’t quite be 100% sure…