Brayden turned two years old on September 1. We’ve officially crossed the line from baby to toddler, and, as President Mommy of the United States of Brayden, it’s time another milestone review.

I can’t believe Brayden is two. I know I say that at the beginning of every state of the baby toddler post, but it’s because I mean it. Motherhood has changed so much about me, including how fast time passes. Here is a photo comparison of little b now at two years old and then at one year old: 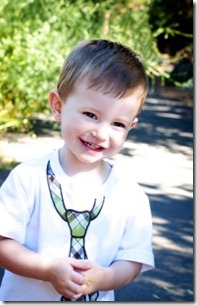 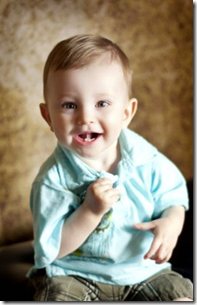 He’s turning into a little man! He’s sitting in the first picture because he couldn’t stand on his own. Now he can’t stand still.

Here’s where our little man is at two years old:

Clothing: 2T for now. He’s hard from a clothing perspective; weight-wise 2T is a bit too big around the waist (which I why I buy clothes with the adjustable waistbands) but height-wise he fit perfectly and may almost be a 3T in another inch or so.

Skin: Nicole Kidman doesn’t have anything on Brayden’s fairness.

Eyes: News alert! It’s official—Brayden has partial heterochromia iridis and central heterochromia. What do these crazy scientific words mean? The simple answer is that Brayden has three different eye colors. For both of his eyes, the central (pupillary) zone right around his iris is a greenish-amber, and the mid-peripheral (ciliary) zone in his outer eye is blue. On top of all that, he has a dark brown streak that shoots out across his left eye at the 2 o’clock mark. The dark brown streak was evident the day he was born even when he had gray eyes like every baby does. As his eyes developed, so did the dual iris colors. There is a great picture from the post State of the Baby: 18 Months Old that shows it really well. I think it’s really cool (and so do the people who stop me in the grocery store to ask about his eyes!)

Want to learn more or see better pictures of other examples of what Brayden’s eyes look like? Click on the links above or here.

Teeth: Brayden has a whole mouth of pearly whites. I think there are a few toddler molars that come in around 3 but other than that, they’re all there.

Food: His major favorites are macaroni, string cheese and fruit. My Lord, this child loves fruit. He should be the poster child for Edible Arrangements. He’s also becoming a little more open to new foods. Pizza, tortellini and quesadillas are the new foods to the scene. And drum roll please…Brayden had his very first McDonald’s two weeks ago. He liked the apple slices, french fries and chocolate milk best. The McNuggets were OK. Several people remarked about how old B was before his first Golden Arches experience. Brian and I don’t have anything against McDonalds; it’s just neither of us eat much fast food. Trust me, Brayden will have McDonald’s in his life—it’ll just be for special occasions and treats.

Personality: Brayden is a social, loving, happy child. He LOVES being the #1 helper. Whether helping Grampa build things or greeting his friends at daycare and running to get their bib and yogurt for breakfast, he relishes in being your right hand man. But it’s more than just helping, it’s being thoughtful and proactive. He’s also quite empathetic, and that’s a trait I hope to cultivate in him so he takes it into adulthood. He is truly a happy child whose fabulous double-dimple smile makes me the happiest Mommy in the world. 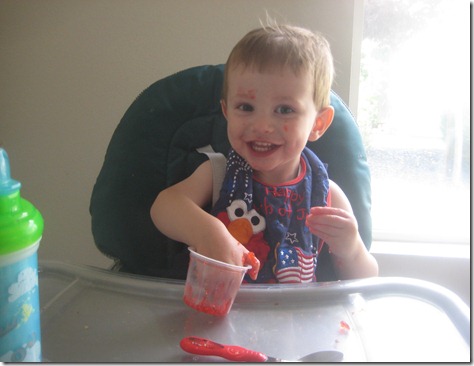 But being two isn’t all about always being a perfect helper and super smiler, it’s also about being a perfect pain and super independent. “No!”, “Me do it!”, “Brayden’s!” and “Stay!” (as shouted at me when he wants me to stay away from whatever he’s doing that I’m about to intervene in) are commonly shouted declarations. He’s also a BIG boundary pusher. He’ll do the same naughty things he knows he shouldn’t (e.g., play in Avery’s water bowl, drop his food from his high chair, play with electrical cords—you get the idea) over and over again and literally stare right at me while he does it to see if one of these times it’s OK.

Favorites: Elmo is still a favorite but the up and comer character is totally Thomas the Tank Engine. He loves watching Thomas on Sprout and we watch it together before bedtime. Many of  his baby favorites carry through still too. His baby blanket, stuffed puppy and rocking in the chair at night and nap are still habits that are alive and well. Brayden loves to read, and I hope it stays that way. Here’s a picture of him poring over some new books from my friend Krissy that she sent for his birthday. 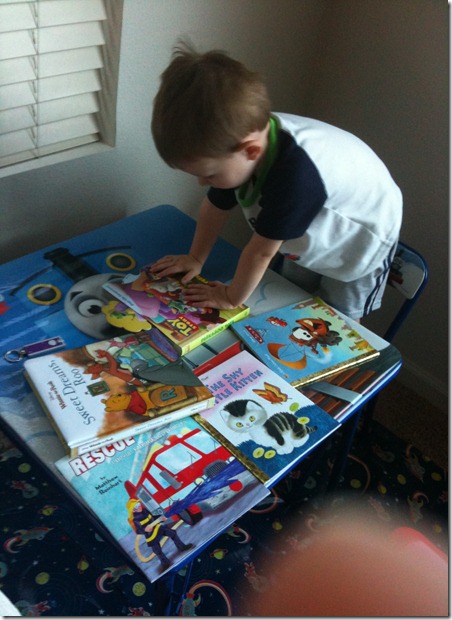 Other big trends right now are airplanes and other things “up in sky” and trucks. Golf is still the coolest sport ever, and he’s a total water rat. His happy place is being outside running around.
Probably the newest favorite are his Toy Story Adidas sneakers he got from my friends Katie and Chris. From the first moment I put them on, he’s been as proud as a peacock about them. 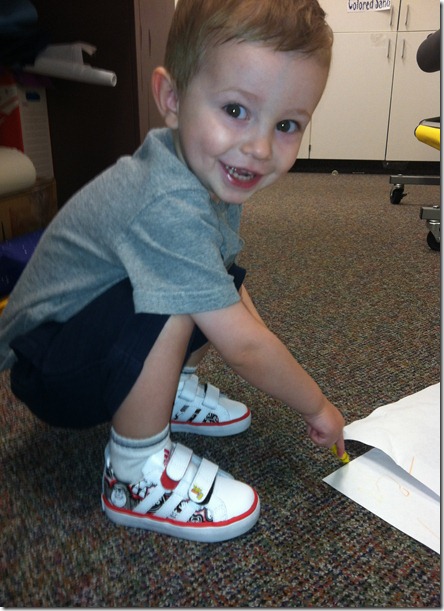 Development: I’m beyond counting when it comes to the number of words in his vocabulary. He easily uses two- and three-word sentences and phrases. Brayden is also a little parrot. His version of the Miranda rights would read “Anything you say can and will be repeated to you by a two-year-old toddler.” He listens to you, immediately repeats it, considers how/why it’s being used, and, sure enough, up pops the phrase in the correct context shortly thereafter. For example, when Avery jumps up on the dinner table, I firmly tell him to get down with Brayden’s little voice not too far behind. The next day, Avery did the same thing but I wasn’t there to see it. However, I was tipped off when little b started yelling “Avery, get down!” and “No table!”. Poor Avery; now he’s got both of us on him.

Brayden can count to 10, but often skips over the number four which I find funny because it’s so random. He is beginning to voice the letters, sounds and rhythm of the ABCs and he’s learning his colors and shapes.

And this concludes the State of the Toddler: Two Years Old. I appreciate that you still follow along with our adventures after two years and can’t wait to share what comes next.
For those of you eager to see pictures of Brayden’s birthday party, that will be next weekend’s post.
I’ll leave you with some cute pictures from the past year.

Teething on a Boston Terrier stuffed animal in November 2011 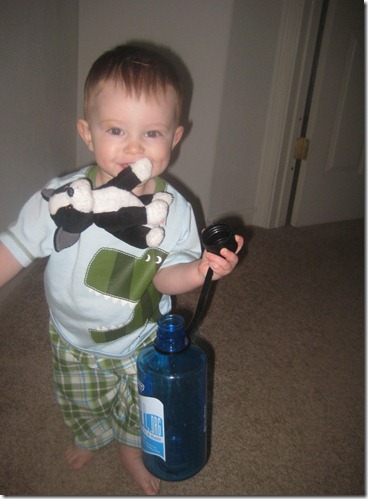 Riding and scampering on the couch on New Years Day 2012 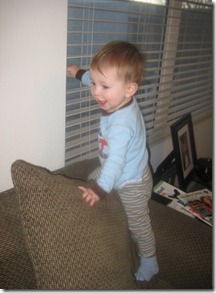 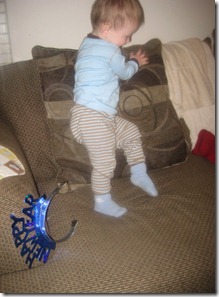 Eating macaroni from the strainer in June 2012 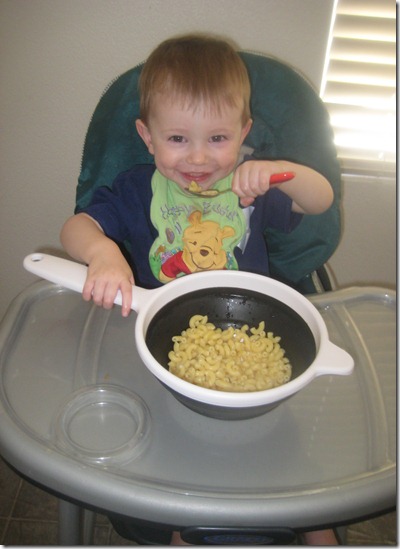