What’s little, red hot and a force of nature?

Had you asked me this question earlier in the week, I would have said Brayden and his sky high fever. But thankfully he’s better so today’s answer is the amazing annular solar eclipse (also sky high).

It all started with a phone call from daycare on Tuesday morning. Brayden was running a high fever. That was the start of four days of high fevers and low energy for our little one. We went to the doctor’s office twice, on Tuesday when the fever first started and on Thursday when he hit 103.9 degrees, but nothing was “wrong” with him, at least from a diagnosis type of way like an ear infection or something like that. Brayden had a nasty virus his baby body was cooking out of itself. All we could do was keep him hydrated, medicated and love-icated.

Brian and I took turns caring for him all week, and Brayden was able to get some special love from his Grandma Karen, Grandpa Jewell and Uncle Mark(Brian’s mom, dad and brother) who were in town visiting over the past week.

Being sick is always bad but one unintended bright side is how cuddly Brayden becomes (when he’s not a hot ball of fuss) and how adorable he looks when he falls asleep. Here’s a picture from Thursday when he fell asleep nuzzled next to me on the couch. 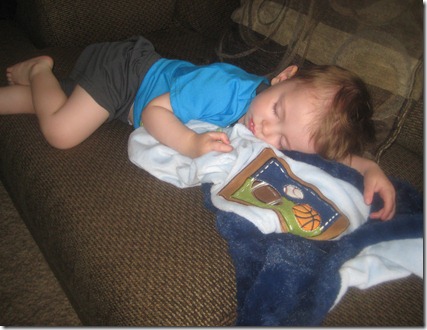 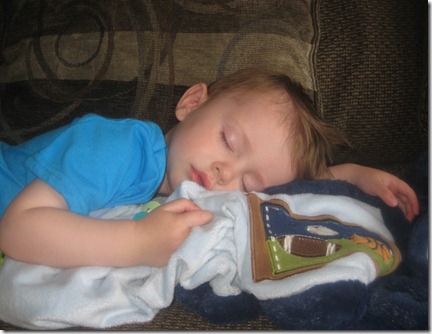 I would take his fever in a heartbeat. Anything to alleviate his uncomfortable, sad little body’s pain. Luckily, things started turning around Friday afternoon. The fever came down to 101 and we knew we were headed in the right direction. Flash forward to today, and Brayden was back to his usual self.

This is where the second answer to the post’s headline question comes in, the annular solar eclipse. A annular eclipse occurs when the Sun and Moon are exactly in line, but the apparent size of the Moon is smaller than the Sun. Hence the Sun appears as a very bright ring, or annulus, surrounding the outline of the Moon. (You can read all about it on Wikipedia.)

More or less, the sun looks like a bright ring of fire, and it’s something you are lucky to see ever in your life. The “see” part is tricky though because you can’t look directly at it or you’ll temporarily blind yourself from the incredibly bright light. You need special eclipse glasses, and they’ve been in short supply and high demand in Reno the past few days. I was lucky enough to snag a few pairs for family and friends at the local planetarium so we were able to see it.

Here’s a few pictures of my mom, dad and me with our eclipse viewers on during the partial and annular eclipse phases. 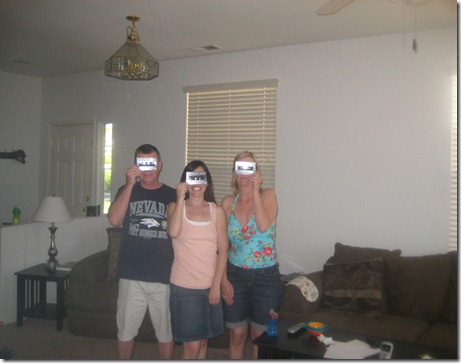 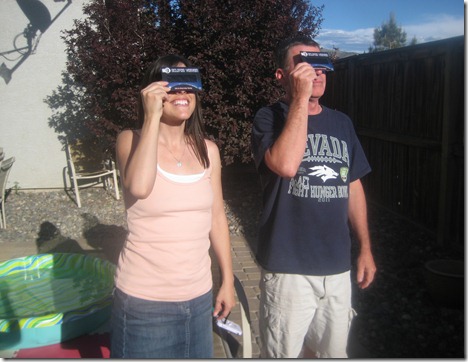 My dad eventually figured out an ingenious way to balance them on his nose, sans hands. 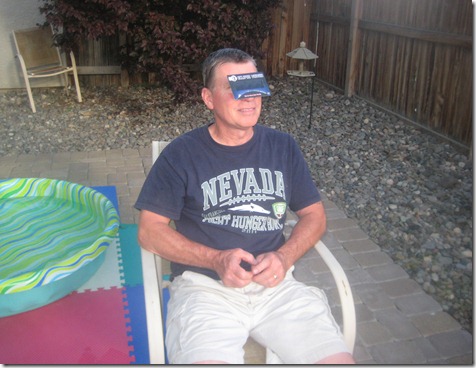 And here’s a picture of what the sun looked like during a partial phase through the glasses. It gives you a little feel for what we saw. It was awesome. 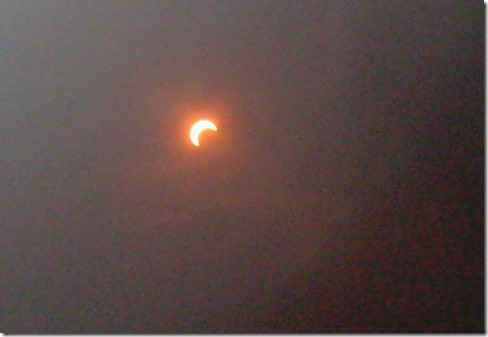 We had a pesky cloud that threatened to ruin the whole thing but luckily it cleared for just long enough to see the “ring of fire” moment. It was a truly amazing sight to cap off a long week. If you were in the Reno area, I hope you saw the eclipse too. And if you’re not from around here, don’t laugh too much at the glasses…they were the coolest $2 I’ve spent in a long time!