About a year and a half ago, I asked Brayden’s pediatrician about when to switch to a toddler bed. The doctor said to leave Brayden in his crib until the day came when he started to crawl out. But he never crawled out! He always stayed put until I got him out in the morning. And trust me, Brayden is a skilled climber (and jumper and adventurer) so it wasn’t lack of ability—it was him just being a good boy in this regard for a lot longer than expected.

Brayden’s turning three in about a month, so, climbing out or not, it was time to continue along the path to little boyhood by converting the crib into a bed.

We talked about the big day in advance and shopped for new sheets to celebrate the changeover. On the day of, my dad came over to assist in the official ceremonies. 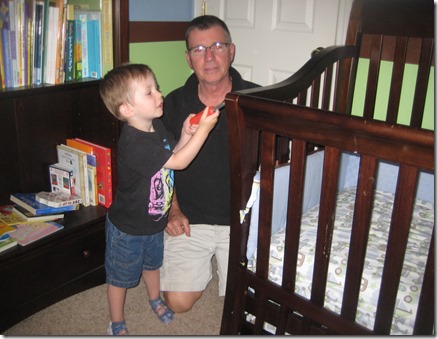 The procedure was relatively simple because Brayden has the type of crib that transforms into a toddler bed then converts into a full-size bed when he’s older. The front piece of the crib came off, was replaced by a guardrail and voila! Toddler bed! 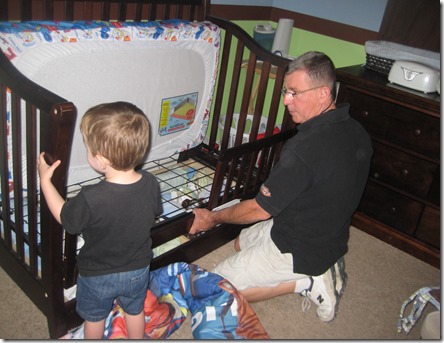 Brayden being Brayden though, he simply had to work alongside his Papa and use the tools too. Of course.

Once it was done, Brayden hopped into bed, rolled over and…promptly whacked his head on the rail. It was actually pretty funny (though maybe not for Brayden). He started crying, pointed to the rail and said it “hit” him. We then had a little convo about being careful when rolling over. 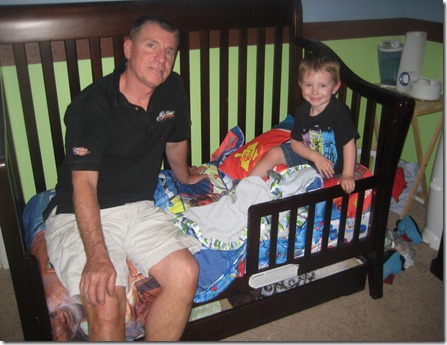 Brayden’s first night in his big boy bed was a success. He slept a full night all the way through to morning. And guess what? When it was time to get up, he still didn’t venture out on his own. He called for me, waited until I came in and greeted me with a “Mamma, I slept good!” before giving me a big hug and climbing out. 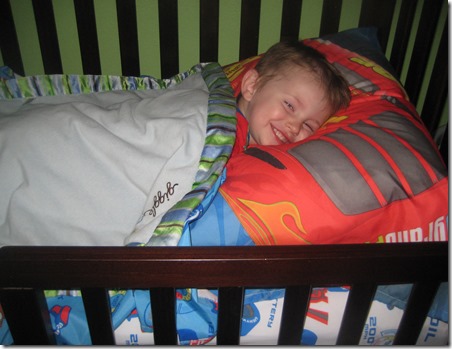 I may grumble from time to time about Brayden’s growing autonomy but it makes these moments even sweeter. He may be growing up by the second, but I’ll hold onto the precious baby habits and rituals that are still left today.