Brayden had surgery to remove his adenoids and put tubes in his ears, and it was a day of ups and downs, to say the least.

Note: If you haven’t read Halloween 2012: Attack of the Middle Ear, I suggest you click the link and read the first part of the story before continuing.

Surgery day started bright and early on Thursday with a 6:45a check in at Renown. My mom, Brayden and I set up camp in the waiting area and played, watched cartoons and read books. Pretty much anything to keep Brayden from wanting to eat or drink. 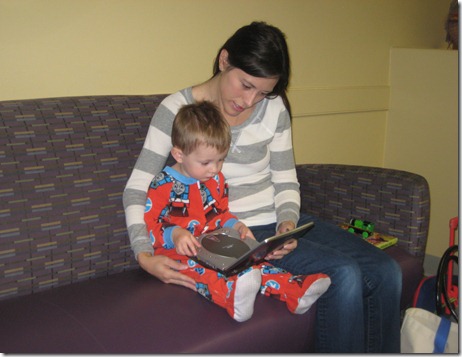 Being the ever brilliant two-year-old, Brayden quickly realized he had full reign over the situation and started getting silly. 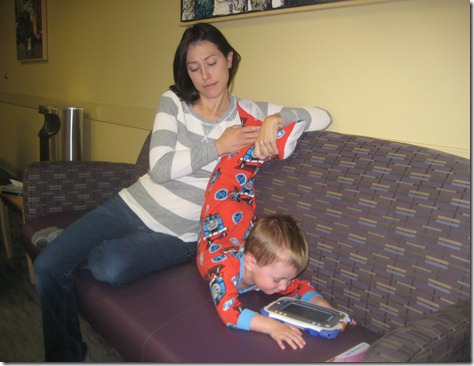 At 7:45a, the nurse came and brought us back to prep for the procedure. 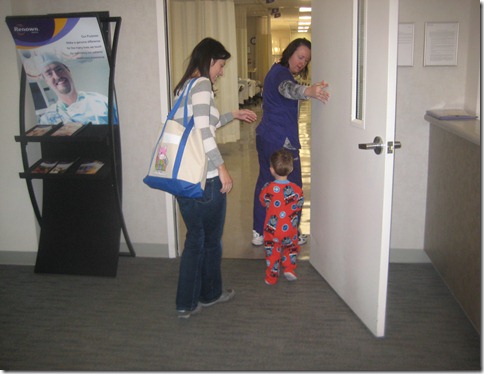 Renown does a great job with kids, and we were put into a private room set up to make Brayden as comfortable as possible. I had been discussing Brayden’s upcoming surgery with him over the past week (as much as you can with a little one) and now that we were in the moment, we were able to see and touch some of the equipment we had talked about.

He got a kick out of me wearing the mask… 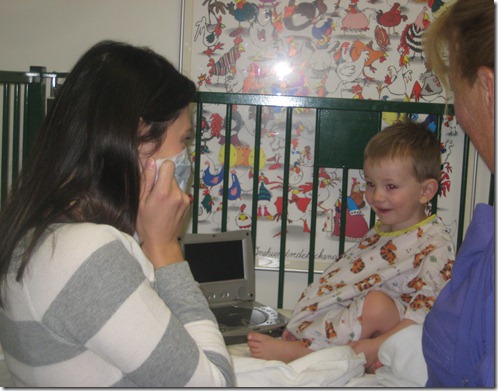 …and test drove a future as a doctor with the stethoscope. 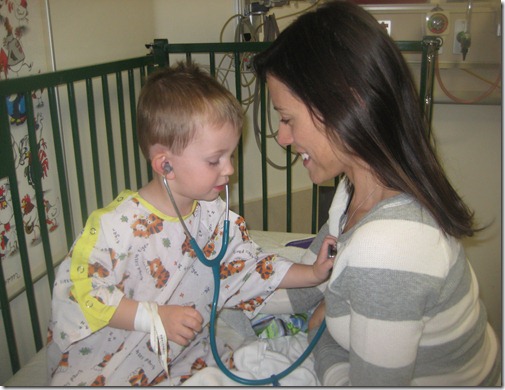 I think Dr. Jewell has a nice ring to it, don’t you?

At 8:30a, Brayden’s doctor, Dr. Dooley, and anesthesiologist, Dr. Class, came by to say hi and discuss what was going to happen. Then came the hard part—separating. It was a tough moment when they had to carry Brayden away. He was upset and scared and I felt so ineffective trying to reassure him as they walked away.

After about 30 minutes, Dr. Dooley came back out to discuss the results of the procedure. Brayden’s left ear wasn’t too bad, but his right ear was a disaster. Lots of fluid and signs of a recent rupture. Both ear drums were so flimsy it’s like they were made of wet tissue paper. This resulted in Brayden needing special tubes that almost hold the ear drums up. The doctor also saw that his adenoids were clearly a contributing factor to his ear infections so those had to come out too, meaning a much more invasive procedure overall.

Once we were done with the doctor, we were all allowed back to see little b. The next several hours were rough, and there are no pictures from that part for obvious reasons. Brayden was rocked by the anesthesia and had an extremely rough two and a half hours after surgery coming out of it. He actually required six doses of fentanyl over that time in his IV to calm him, and an oral dose of valium finally took the edge off enough for him to relax as the last lingering affects of the anesthesia wore off.

We were in recovery from about 9:15a until we left at 2:30p. On the bright side, Brayden watched (most of) his first movie ever—a Disney film (of course!)—
101 Dalmatians. Brayden did better over the rest of the day and night, thank goodness.

The next day was dedicated to quiet play. Lots of cartoons, reading and playing with a new, exciting toy—a Thomas the Train set from Uncle Ryan (my little brother) that I had been holding onto from Brayden’s 2nd birthday. This was the perfect reason to break it out, and Brayden was thrilled. 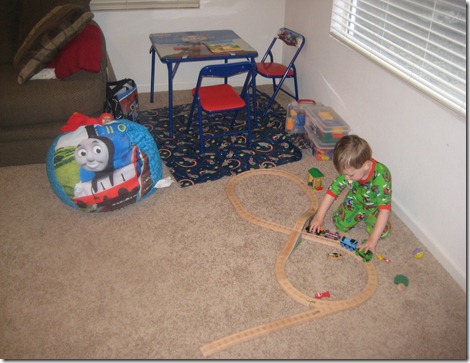 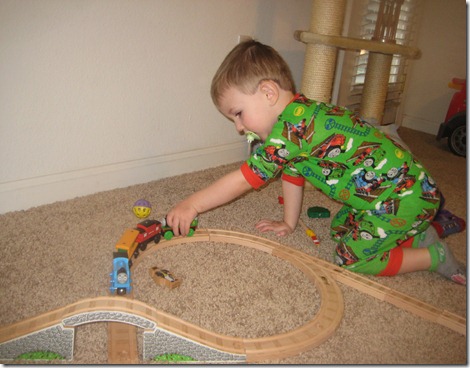 If you feel like spontaneously playing a game, then you’re in luck. Count every instance of Thomas the Train gear you spot in these two pictures above, and I’ll list the answers below.* As we’ve established in other posts, Brayden seriously loves Thomas the Train.

The rest of Friday and all of Saturday have gone well for Brayden, and he’s getting better each day. I can already see an improvement in his nose (it’s running less because the adenoids are gone), and I look forward to evaluating his hearing at our follow up appointment after Thanksgiving.

Thank you to everyone who reached out with kind words and thoughts before, during and after his surgery. It means so much to have your love and concern focused on Brayden. We are very appreciative and lucky to have so many people who care.

* Answers from the photo find: