This week we're enjoying a visit from my sister, Heather. She hasn't seen baby muffin (her nickname for Brayden) since he was little peanut, so she's been having fun seeing how big Brayden is now.


Heather and her husband, Jake, moved back to Connecticut when Brayden was only a month old. That post, Baby Muffin Says Goodbye, was a tough one to write. Although Aunty Heather and Uncle Jake saw Brayden again during our trip to Connecticut in November, Brayden has obviously grown up quite a bit since then making this a sort of "getting to re-know" you visit.

Heather, my brother Ryan and my mom came over on Thursday afternoon to "horse around" with little B. 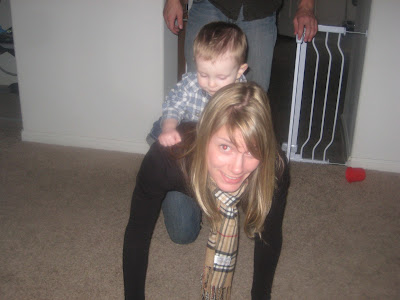 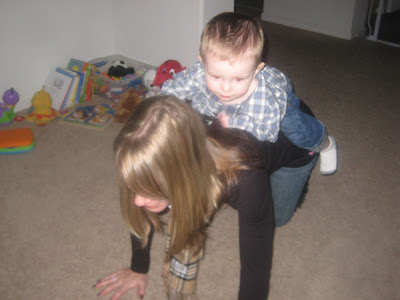 Then on Friday, the whole family came over for a pizza party. Brayden particularly enjoyed the cheesy bread from Papa Murphy's.

﻿
One of Brayden's favorite "games" is to pretend to want to feed you but then pull the food back and pop it into his own mouth. He thinks this is hilarious! Grampa was his most recent unwitting victim.

﻿
For the whole evening, Brayden tooled around with his train, played with everyone and had a great time. The video is a super cute, 10-second snippit of Uncle Ryan and Brayden doing their personal rendition of "Good Vibrations". 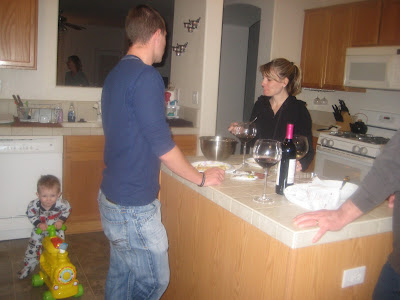 On Saturday, everyone got together again for a family photo session (pictures to be revealed in a future post!) and dinner at Outback. I bet the waiter was wondering why we were all dressed the same. :)

﻿
It's been a fun week, and it's really great to see Brayden getting to know his Aunty Heather. We've been practicing the word "Aunty", but we're not quite there. Heather flys home on Tuesday, but it's not too long before our next Connecticut guest comes to town - my Aunty Liz in late February. We love all these visits and hope more East Coasters come our way soon.

Also, a little note about next week's post. As I'm sure you are well aware, the Patriots (my team) are playing the Giants. You'd think I would be a little more excited about this, and I would be if the Pats were playing ANYONE else but the Giants. See, the thing is I'm not entirely healed from the debacle that was the 2007 Super Bowl. If the Patriots demolish the Giants and avenge their previous loss (and I sincerely hope they do), you can expect a blog post celebrating the win. If they lose, I may have to medicate myself and make no guarantees about a blog post arriving on Sunday as usual. So, in the meantime, go Pats!!!
Posted by Beth at 12:12 PM